I haven't updated the blog for a while, this is due to work and other commitments (she wanted a load of work done on the house).  So that's all taken care of now.

As the weather is warming up here as well, it's time to get back at it.

I have a battery story to share with you, Now as you may know I am an avid supporter of Victron equipment, I install lots of systems for other people and have never had reason to be upset at anything Victron.  That however has now changed, but only with respect to their batteries.

For this project, I decided to go with the Victron 200Ah 24v HE series lithium batteries, their energy density was very impressive and I liked the way they connect to the dedicated lynx-ion BMS and integrate to other Victron components.

So I purchased 4 Batteries at a cost of 16,000.00 Euro, I connected them up in the workshop and began testing the whole system on the bench, they were indeed very impressive.

Until, one day after about 6 months, I noticed that one of the batteries had disappeared from the network, I did all the usual disconnect, reconnect reboot the control system and BMS. But to no avail, it was gone, fully charged but not responding on the data network.

As this battery was only 6 months old, I contacted the dealer i bought it from,  He said no problem it's under warranty, I will get it collected and replaced, it will take about two weeks.

Now the fun begins,  after 3 months and no sign or mention of the battery, I again contacted the dealer, he chased it up with Victron and they came back with the answer:

"Oh, that's water damaged it will cost 3000.00 euro to repair it's not covered under warranty"

They later asked whether I wanted to repair it or scrap it. If I wanted it back there was a 350euro charge for carriage back to me.

Now here are some interesting facts:

Victron now makes a waterproof cover for that battery, it's not on and pricelists but it's available if you know to ask for it.

Victron has now discontinued selling the battery, so I am now the proud owner of 16k's worth of obsolete batteries before they are even installed in the truck.

All four batteries were in exactly the same place in the workshop, under the bench, so how was the one in the middle water damaged and the others not ??

Here is a picture of them, in the dry: 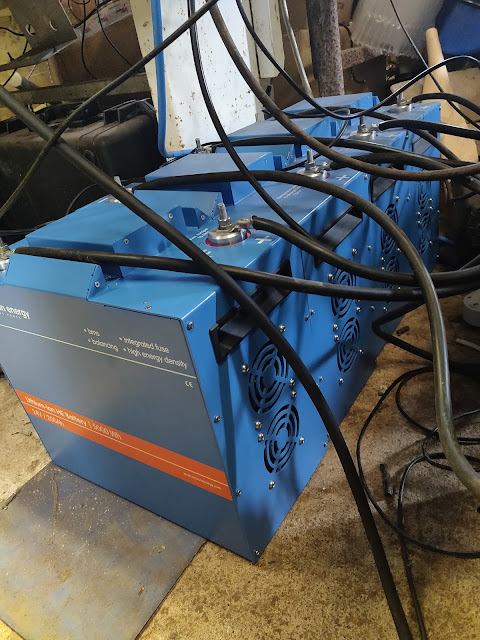 The system was designed to use 4 batteries, And I can't even buy another one now if I wanted to. So now I am left with three batteries I cant use.

So as far as I am concerned I am advising all my customers NOT to buy Victron batteries, I personally will never buy them again.

Things sometimes go wrong, That's ok, It's how you deal with it afterward that matters.  Victron dealt with this badly.

Luckily, there are now good BMS systems available so it is getting very easy to build your own good quality battery systems and manage them properly.

I am in the process of replacing my Victron battery system with Winston cells and a REC BMS.  I will have 24v 1000AH, so more capacity for less than half the price of a Victron system. More on this later.

PS, three batteries and a BMS for sale if anyone wants them.

I wanted to have an outside kitchen/barbeque, so I am building it into one of the belly boxes that is behind the last axel.

it has two stainless steel drawers some storage space and a slide-out gas grill plancha.  It's a work in progress, but here is the idea. 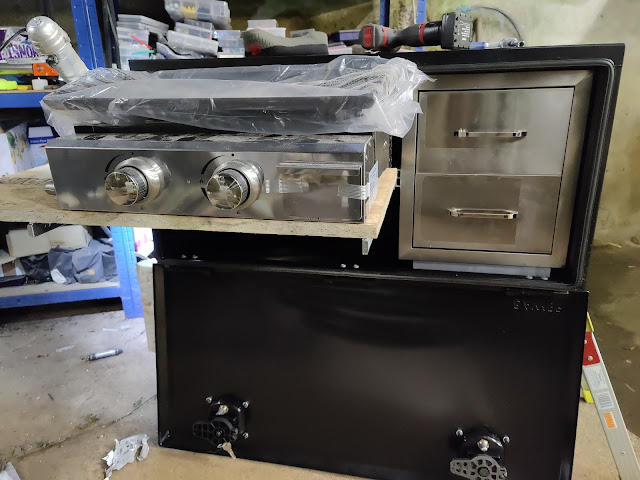 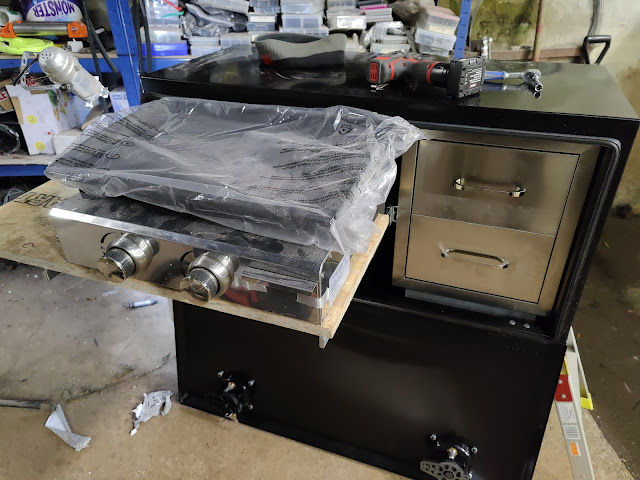 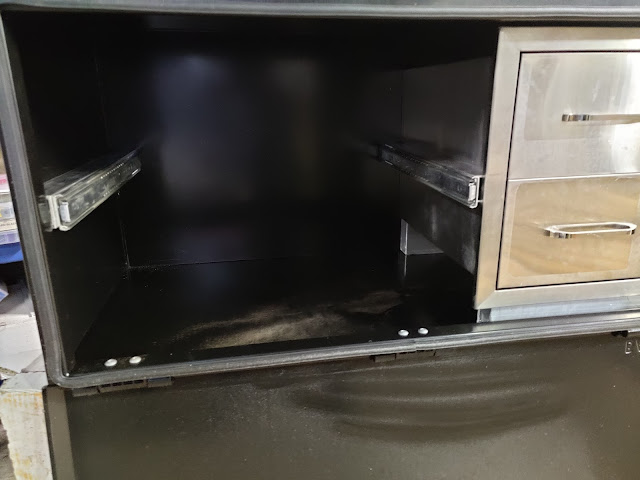 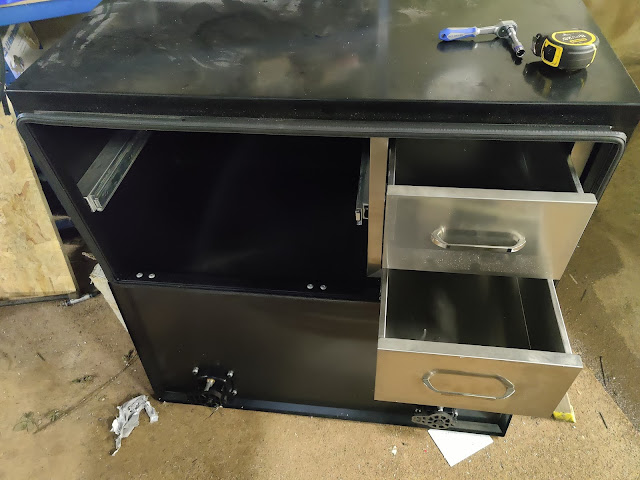 Here is a couple of pictures of the spare wheels in their brackets.

So the crawl through has now been fabricated, its all welded in place, just a bit of paint needed now, I will line the inside of it with carpet for a bit of comfort.

I have used a 20mm compression seal where it joins the cab,  there is no clips or anything to do before you lift the cab. 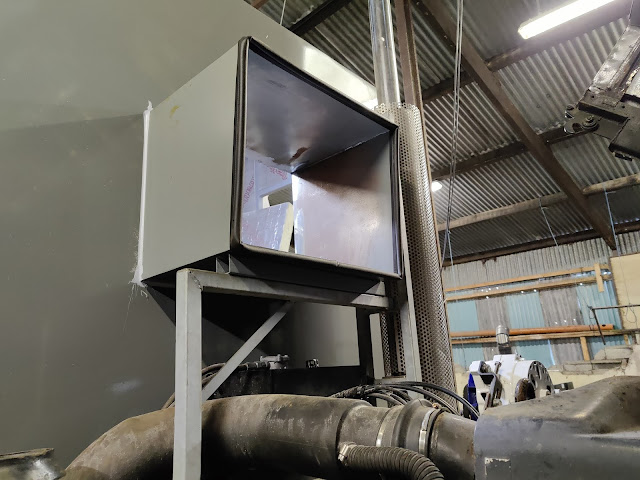 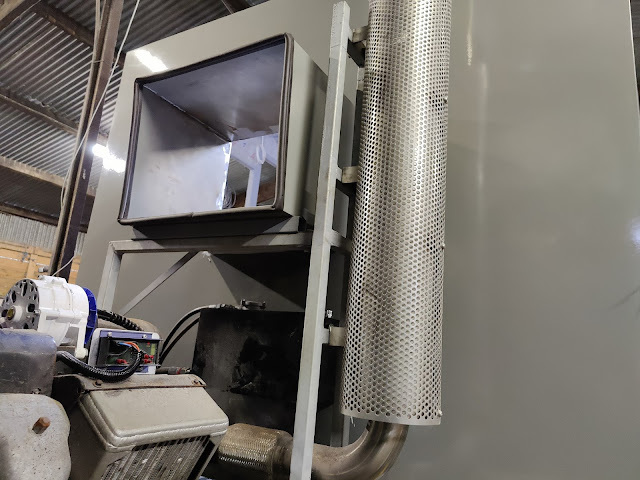 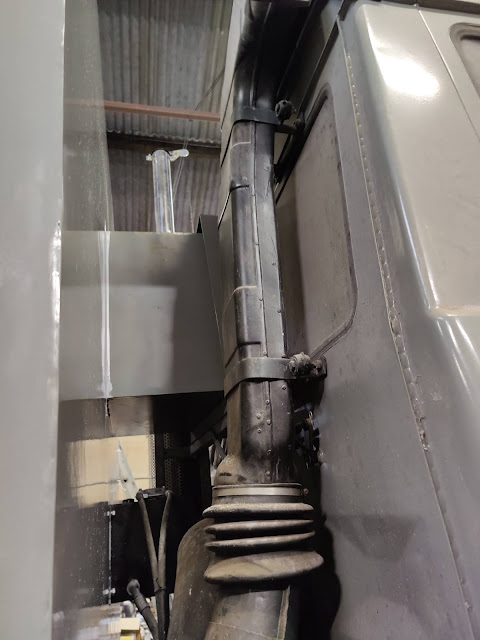 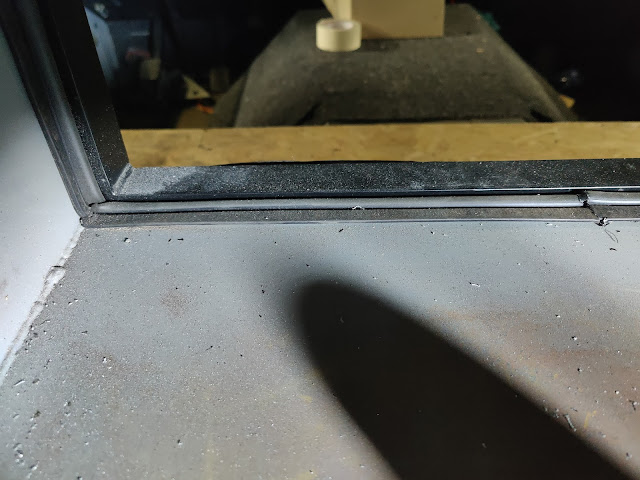 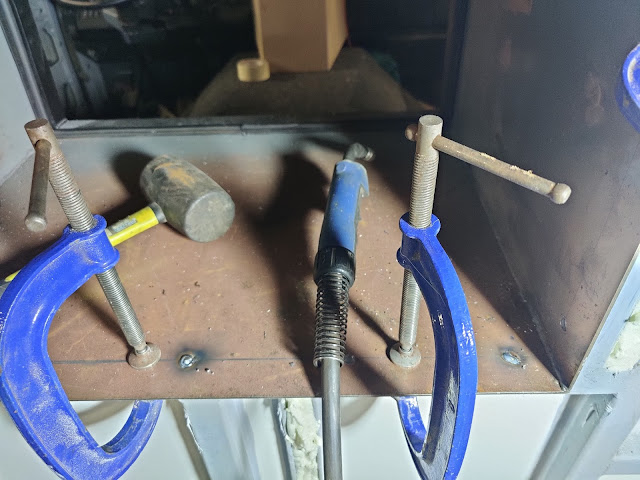 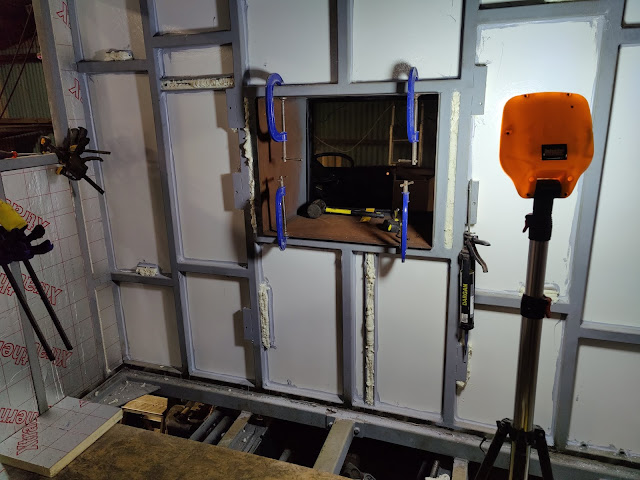 The last Bit of Body

Now that the crawl through is finished, all the metalwork is done for it, the time to finish

the very last bit of the body panels, The Front.

That is the last of the fiberglass sheet to finish the body completely. A bit of a milestone i would say.

And so here it is:

When I started thinking about the crawl through, it was a bit daunting, I have looked at other trucks and seen various methods of making the seal.

I knew that I didn't want to have to do anything before lifting the cab, like undo clips or bolts or anything like that. I would simply forget and would end up breaking somthing.

It ended up being a lot simpler than I thought it would be.

I started by making the tunnel out of 3mm steel, this will be fitted into the front of the body, the face of that tunnel has a seal on it that mates with the flange I made to fit into the hole I cut in the cab.

As the Tatra's cab is live mounted to the chassis and not rubber-mounted, it doesn't move, so the seal mates perfectly

Here are a few more pictures.

The toolbox on the left-hand side of the truck is for wheel changing tools airlines and puncture repair equipment.

I have installed a hose reel with a 30Mtr hose and an automated tire inflation/deflation system, so the tires can be pumped without having to sit there holding a button for hours.

Help Speed Up the Project

Promote Your Page Too